Migraine Onions to Elle Magazine for the Migraine Pose

Today, I regretfully present Migraine Onions to Elle Magazine for the Migraine Pose. I say, “regretfully,” because if Elle were engaging in responsible journalism, this wouldn’t be necessary.

“Migraine Pose,” coined by makeup artist Nam Vo, involves posing with one or two hands pulling your face up by your temples as if you had a well, migraine. There’s a reason it’s trending: The pose tightens the face, makes your cheekbones look more prominent, and lifts the brows. It’s a temporary facelift for the ‘gram.

What? I was in San Francisco for a meeting of the Coalition of Headache and Migraine Patients followed by the annual scientific meeting of the American Headache Society when all of this broke loose. You can imagine the responses from everyone around me. Plus, this was happening during National Migraine and Headache Awareness Month! We were all hitting social media with responses and reactions. Soon, Elle changed the title of the article to “All the Pretty People on Instagram Are Doing the “Headache Pose,” which wasn’t received any better.

The American Migraine Foundation was quick to issue a statement that began:

In the United States alone, more than 37 million people have migraine and approximately 6 million live with symptoms almost every day. One in five women experience migraine and it is the single most disabling disease for women under the age of 49 years, worldwide.

This week, just days before the end of National Migraine and Headache Awareness Month, Elle USA published this article, highlighting fashion influencers’ use of the “migraine pose.” According to the article, the pose is trending because it tightens the face, emphasizes cheekbones and draws attention to manicures.

The article has generated outrage in the community from people and patients whose lives have been seriously impacted in almost every way imaginable by this invisible and highly misunderstood disease—a disease that historically has had few options for treatment. (Please continue reading…)

One of the best social media responses I saw was from Dr. Bert Vargas on Twitter. Dr. Vargas showed Elle a #truemigrainepose while sharing the winning video from this year’s Migraine Moment Video Contest. I’ll share both the Tweet and the video with you: 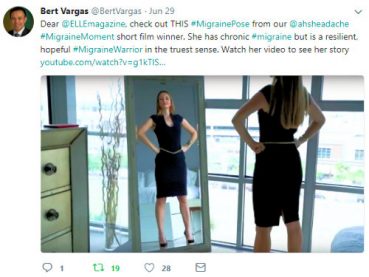 To Elle, Kristina Rodulfo, and Nam Vo, try thinking before you publish. Your failure to think has resulted in further stigmatizing people AND in Migraine Onions to Elle Magazine for the Migraine Pose. There is absolutely nothing fashionable or glamorous about Migraine. Nothing. The World Health Organization (WHO) has reported that a severe Migraine attack is as debilitating as quadriplegia. Migraine DISEASE steals relationships, careers, and even lives. It robs people of everything, including hope. And changing the word Migraine in the article title to Headache didn’t make things any better. Cluster Headaches are called “suicide headaches” for a reason. People living with Migraine disease, Cluster Headaches, and other Headache Disorders already live with enough stigma without your adding to it. Quite simply – SHAME ON YOU!

For our readers who wish to comment to the people at Elle who are responsible for this travesty, here are some social media links and hashtags for you:

So, I award Migraine Onions to Elle Magazine for the Migraine Pose. It’s really a shame. They have such a wonderful audience and reach. They could have done so much good during Awareness Month, but all they did was add to the stigma associated with Migraine disease, Cluster Headaches, and other Headache Disorders.

About Migraine Pearls and Onions: Migraine Pearls are awarded to the “gems” in the Migraine community for valuable, shining content and support… current and accurate information… being exemplary citizens in the community… things of value. Migraine Onions, on the other hand, are awarded to “stinky” things in the Migraine community — old or inaccurate content… things that perpetuate misconceptions and stigma rather than fighting them… being “bad” or irresponsible citizens in the community… worthless products, eBooks, etc… and more.

Do you know an organization or individual you'd like to nominate for a Migraine Pearl or Onion? Tell us about it!