Out of My Head Migraine Documentary Film Review

A review of the Migraine documentary film Out of My Head, which is now being shown at special screenings. A definite must-see!
Author:
Last updated: Aug 22, 2019 @ 7:14 am Medical Review: David Watson, MD

It has been my great joy and privilege to see the Migraine documentary film Out of My Head at two screenings. It was beyond magnificent. The passion and dedication of Susanna Styron, the writer/director, and Jacki Ochs, the producer, and everyone involved in this documentary shine through and dazzle the audience.

Out of My Head shows what Migraine is and it’s impact from a variety of perspectives — the Migraine patient, family members, physicians, researchers, and more. It’s honest and really hits home. For people with Migraine, Out of My Head is validating. For people who don’t have Migraine, it can be exceptionally illuminating and educational.

About the Migraine documentary film Out of My Head

It took nearly eight years to complete Out of My Head. The process was start and stop, related to fundraising and other professional obligations.

The film was funded by private foundations, organizations and individuals, including a successful Kickstarter campaign supported by over 850 people. Principal funders include Association of Migraine Disorders, The Mayday Fund, Migraine Research Foundation, and The Garrett and Mary Moran Family Foundation.

Watch the Out of My Head Trailer

The inspiration for Out of My Head

Susanna’s daughter, Emma, and several of Jacki’s family members suffer from Migraine. When Susanna’s daughter first experienced Migraine, she had episodes of partial blindness with dizziness and vomiting, but no head pain. It was terrifying. When Emma was diagnosed with Migraine, Susanna was shocked to learn how many people live with the disease. She and Jacki Ochs, the producer of Out of My Head, decided that there was a story to tell about a condition which deeply affects so many families yet remains largely misunderstood and stigmatized.

Out of My Head synopsis

When a filmmaker investigates the devastating migraine attacks which have her daughter in their grip, she discovers migraine is not just the terrible headache she always thought it to be, but a mysterious neurological disease afflicting nearly a billion people worldwide. She decides to make a film and trace the journey, as mother and daughter seek understanding and ever-elusive treatment. Along the way we hear from doctors, neuroscientists, and other migraineurs. Among them: an Iraq war veteran whose migraine attacks stem from combat related traumatic brain injury; a college professor deciding whether she dare go off her migraine medication to have a second child; a husband who becomes a migraine activist on his wife’s behalf; and Joan Didion, reading from her legendary essay “In Bed.” Their journey takes us on a wild ride through migraine’s fascinating history and bizarre symptomology, amid subjects ranging from the gut/brain connection to art and spirituality.

From Alice in Wonderland to the N.B.A.’s Dwyane Wade, from the Declaration of Independence to the music and art of Hildegarde von Bingen, migraine has figured prominently in the human condition. Yet the disease remains largely a mystery to medical science – underfinanced, stigmatized, and invisible.

This is the story of people living in chronic pain, with a disease that has no cure – how it affects them and their loved ones, how they cope, how they see the world through its prism. It’s the deeply felt story of a daughter and mother coming to terms with a condition that will always be a part of their lives.

From the writer/director, Susanna Styron

“When my daughter Emma was fourteen she experienced temporary blindness for several hours. It was terrifying, but resolved itself. Two weeks later, it happened again accompanied by dizziness and vomiting. Panicked, I took her to an ophthalmologist and was shocked when he diagnosed her with migraine. How could this be? She didn’t even have a headache. He sent us to a neurologist, and thus began our long, challenging and fascinating journey into the world of migraine.

Our world was rocked by my daughter’s illness, as her symptoms worsened and she became progressively incapacitated. The more I talked about Emma’s migraine attacks, the more I discovered that countless people I knew also suffered from them. Why didn’t I know that? Were people hiding the condition? If so, why? Or had I been hearing my friends mention the word “migraine” and dismissing it from my mind as just a really bad headache? Either way, it was clear I’d stumbled into a remarkably pervasive, yet invisible, misunderstood and stigmatized disease.

As my research continued, I also uncovered the strange beauty of migraine: sparkling lights, hallucinations, feelings of transcendence, artistic inspiration. I learned that migraine’s history included Thomas Jefferson, Lewis Carroll, Hildegarde von Bingen, Virginia Woolf. The journey took me into the world of neuroscience, and the magnificent, confounding complexity of the brain.

There was an important, compelling, even entertaining story to be told here, with profound relevance to millions of people. And I, as a documentary filmmaker whose life had been hijacked by this neurological disease, was the one to tell it. Partnering once again with producer Jacki Ochs, who has also seen migraine impact members of her family and other loved ones, we set out to make this film and bring migraine out of the dark. By doing so, we hope to create greater understanding and support for the millions who suffer, often in silence and isolation; and to encourage greater funding for scientific research into better treatment, and one day, possibly a cure.”

Quotes from the Migraine documentary film Out of My Head

“When I say a headache, I don’t mean just a headache. I mean something that would totally brutalize you.” ~ Joan Didion

“I tell people that migraine is so much more than just a terribly disabling headache. Migraine is a neurological disorder where certain networks in the brain become activated. Headache is one component of it.” ~ Dr. David Dodick, Director, Headache Program, Mayo Clinic Arizona

“People will say, ‘It’s just a headache.’ They’re not just headaches. There are days that I don’t see anything except for shapes all day long.” ~ Billie Jernigan

“Frequently when they come to the office they say, ‘I want my migraine cured.’ I would look at them and say, ‘If I can cure your migraine, I’m going to get the Nobel Prize.’ That’s how big that is.” ~ Dr. Allan Purdy, Prof. of Neurology Dalhousie University

“For doctors who like to be finished, who like to fix things, this can be a frustrating career.” ~ Dr. Elizabeth Loder,
Mass. General Hospital Chief, Division of Headache, Brigham and Women’s Hospital

“The emotional component of pain cannot really be separated from pain intensity, because it’s all part of how our brain circuit puts things together.” ~ Dr. David Borsook, Director, Center for Pain and the Brain, Mass. General Hospital

“Pain’s a very distributed system. It’s not localized to one spot that you could zap if you needed to; or give one medication that would, like a heat-seeking missile, go to that area and turn it off.” ~ Dr. Alyssa Lebel, Director, Chronic Headache Program, Boston Children’s Hospital

“The state of funding for headache research in general, but migraine research in particular, is scandalous in its almost complete lack of commitment to the commonest neurologic problem that affects Americans.” ~ Dr. Peter Goadsby, Prof. of Neurology, King’s College, London

“Your physiology is very much tied to your psyche, and there is no way to separate the two, or to really allow a pill to resolve everything that’s going on.” ~ Laura Simons, PhD, Director, Biobehavioral Pediatric Pain Lab, Stanford U. Medical School

“I remember several occasions, I’d probably say ten if not more, where she thought she was going to die.” ~ Mercy Lineberry

“The literature is mixed on many of the holistic therapies. We don’t have solid data. But there’s so many things in life and in the world that we don’t have scientific data on. But we know that people respond positively. ~ Lori Lazdowsky, RN, BSN, CPN, Boston Children’s Hospital

“The common refrain for people that have migraine is, ‘No, no, no. It’s not just a headache.’ I think we need to take that a step further and say it actually is not headache at all.” ~ Dr. Robert Shapiro, Prof. of Neurological Sciences, University of Vermont

“It’s more complex for a man to be struck down by something that seems so ephemeral as a migraine, but is as disabling as taking a gun out and shooting him, stopping him in his tracks.” ~ Dr. Peter Goadsby, Prof. of Neurology, King’s College, UK

“I felt betrayed by my body. I felt scared all the time. I’ve never felt anxiety like that.” ~ Emma Larson

“Patients who have chronic pain and have anxiety, it makes their pain worse.” ~ Dr. David Borsook, Director, Center for Pain and the Brain, Mass. General Hospital

If you get a chance to attend a screening of the Migraine documentary film Out of My Head, don’t miss it. It’s also a great film to teach other people about Migraine disease, so consider taking friends and family members with you to see it. It’s one of the best tools I’ve seen to introduce people to what Migraine is and the impact of Migraine on our lives and the lives of our family members.

Out of My Head won’t be shown in theaters as feature films are, and at this point, it’s not available through online screening. To raise awareness about Migraine disease, it’s being shown at special screenings around the country and in other countries as well. On their web site, you can find a listing of scheduled screenings or host a screening in your area. 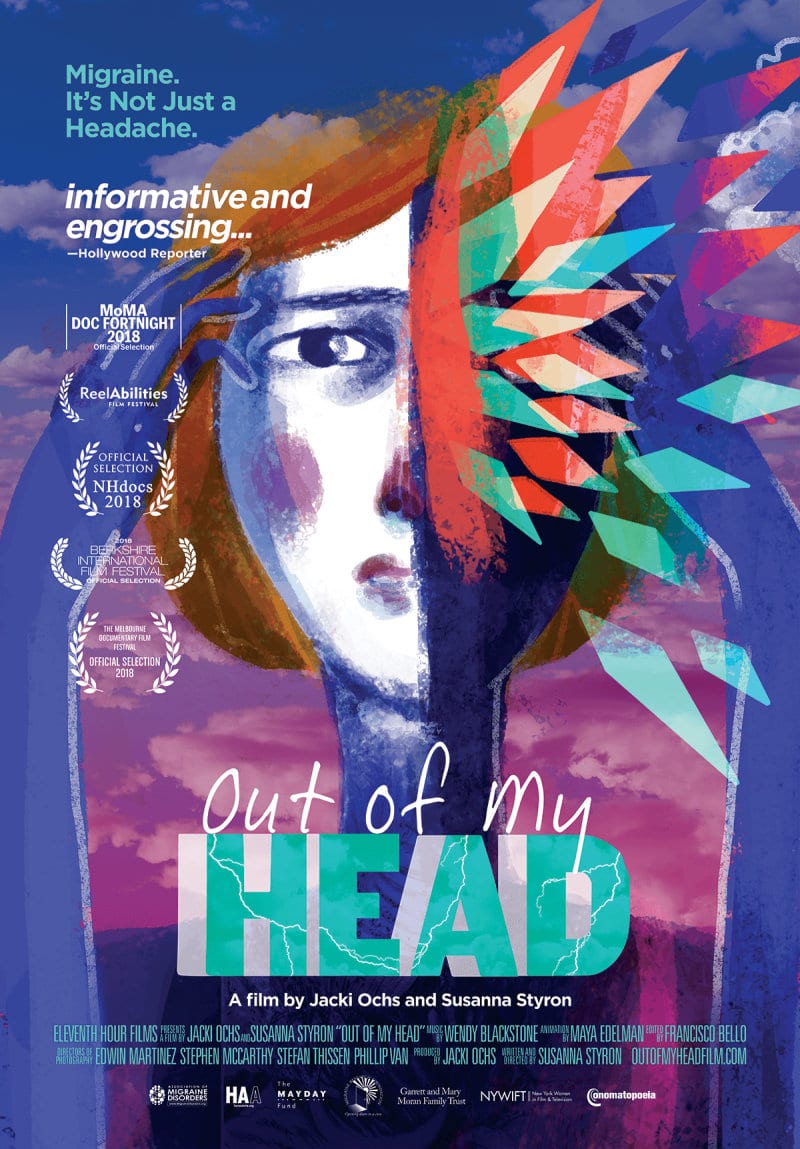