An overview of the seven triptan abortive medications for Migraine and Cluster Headaches and the various forms of triptans.
Author:
Last updated: May 30, 2018 @ 11:50 pm Medical Review: David Watson, MD

Most people are aware of triptans for the acute treatment of Migraine, but aren’t aware that there are several different forms of triptans. It was an impressive event when Imitrex (sumatriptan) was first introduced in 1992. It was the first medication developed specifically to abort Migraine attacks, and six more triptans followed over the next 10 years.

There is also Treximet, which is a combination of sumatriptan and naproxen sodium.

Triptans are used to abort Migraine attacks by stopping the Migrainous process and are a class of medication called selective serotonin receptor agonists. The word “selective” is key here. Each of the triptans binds to different combinations of serotonin receptors, which is why some Migraine patients find that some triptans work for them and some don’t, or that some triptans work better for them than others.

All of the triptans are approved for the acute treatment of Migraine with aura and Migraine without aura in adults. Two of them have been approved by the FDA for children and adolescents:

All of the triptans are available in tablet form. Some are available via additional delivery methods. Let’s take a look at the various forms of triptans: 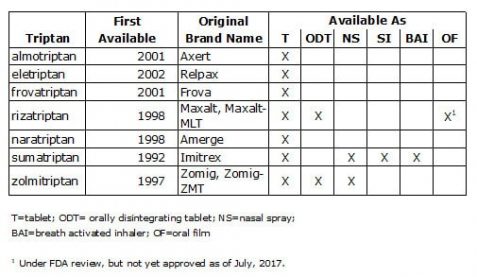 Sumatriptan was the first triptan to be available, and it was first available via their StatDose subcutaneous injection system. The other triptans were first available as tablets. There are good reasons for the multiple forms of triptans. Let’s review the different forms:

Orally Disintegrating Tablets:
These tablets are helpful when water isn’t available (especially helpful when traveling) or when we’re nauseous, and drinking water makes the nausea worse. There’s a fairly common misunderstanding about orally disintegrating tablets. Some people think they’re to be dissolved under the tongue, and that they’re absorbed by the oral mucosa. This is not the case. The tablets can be dissolved on or under the tongue, but the medication is then swallowed with saliva and is absorbed through the digestive system.

Nasal Sprays:
Nasal sprays are absorbed through the nasopharynx (the area of the upper throat behind the nose), so they circumvent the digestive system. For some people with Migraine, this is very helpful, especially if they experience gastric stasis during a Migraine attack. One problem that some people encounter is that some of the nasal spray can run down the throat, which increases nausea for some.

The biggest advantage to subcutaneous injections is that they work more quickly than most of the other forms of triptans. Subcutaneous injections are administered under the skin with a very short needle. The exception was Sumavel DosePro, which “injected” sumatriptan under the skin with a burst of air, but it has now been discontinued. Another advantage of the injectable forms of triptans is that these injections bypass the digestive system, thus avoiding the increased nausea that often occurs when Migraine patients take oral medications. This is also helpful for patients for whom gastric stasis slows the absorption of oral medications.

The Zecuity ® sumatriptan iontophoretic transdermal system was a totally new delivery system. The big issue with making a sumatriptan patch is that the sumatriptan molecule is too large to pass through the skin by placing it against the skin as traditional patches do. This system got sumatriptan through the skin by using a process called iontophoresis, which required the patch to employ a small battery. The sumatriptan molecules were charged, which allowed them to pass through skin. Zecuity was approved by the FDA, but was subsequently pulled from the market when it caused burns on the arms of some patients.

This too is a new delivery system. For most people, the word “inhaler” probably brings to mind asthma inhalers that you place in the mouth, the push down on a canister of medication while inhaling deeply. The breath activated inhaler is vastly different. The top of it is inserted into one nostril and another part is inserted into the mouth. It’s then activated by normal breathing. Asthma inhalers deliver medication to the lungs, but this inhaler delivers medication to the blood stream through the nasal membranes, which gets the medication into the blood stream more quickly than oral medications. The way in which it functions closes off access to the throat so none of the medication goes to the stomach. It’s an interesting delivery system. If you’d like to see how it works, check out this video. ONZETRA Xsail, a breath activated inhaler that delivers sumatriptan for migraine was approved by the FDA in February of 2016.

Another new method of delivery for triptans is the oral film. This has been developed for quick and easy delivery of rizatriptan. It’s a thin film containing rizatriptan that dissolves quickly in the mouth and, as with the orally disintegrating tablets, is then swallowed in saliva. The rizatriptan oral film is under FDA review, but has not yet been approved.

The development of triptan medications for the acute treatment of Migraine was a monumental event that changed the lives of patients with Migraine. The development of different delivery systems for triptans has made them a more viable option for people who have severe nausea with their Migraines, need to take them while traveling, need them to act more quickly, and who don’t do well swallowing tablets.

Triptans aren’t effective for everyone with Migraine, and they cannot be used by some who have issues with heart disease and stroke. One of the goals of current research in the area of acute Migraine treatments is to address the needs of those Migraine patients.